The Reno Ukulele Festival, which will celebrate its tenth anniversary in May 2018, has grown into the largest Uke Fest in the western United States. But hot on its heels is Play Uke’s other event, the Palm ‘Strings’ Ukulele Festival, which is held in the sunny climes of Palm Springs, CA while most of the rest of the country is in the dead of winter. Because of the draw of the desert and the lure of poolside (or in-pool) uke’ing in February, attendance in Palm Springs could surpass Reno in the next year or two.

The lineups for 2018 are massive. Festival producer Douglas Reynolds says that he has so many performers that typically headline festivals booked for Reno’s Tenth Anniversary that he had to draw names out of a hat to determine the order of billing. Multiple styles of music will be represented in both performance and workshop settings. The core group instructing workshops and performing at both festivals includes six time Grammy Winner Daniel Ho, Master Teacher Peter Luongo of Langley Ukulele Ensemble and The Mighty Uke fame, and multi-instrumentalist extraordinaire Abe Lagrimas, Jr. 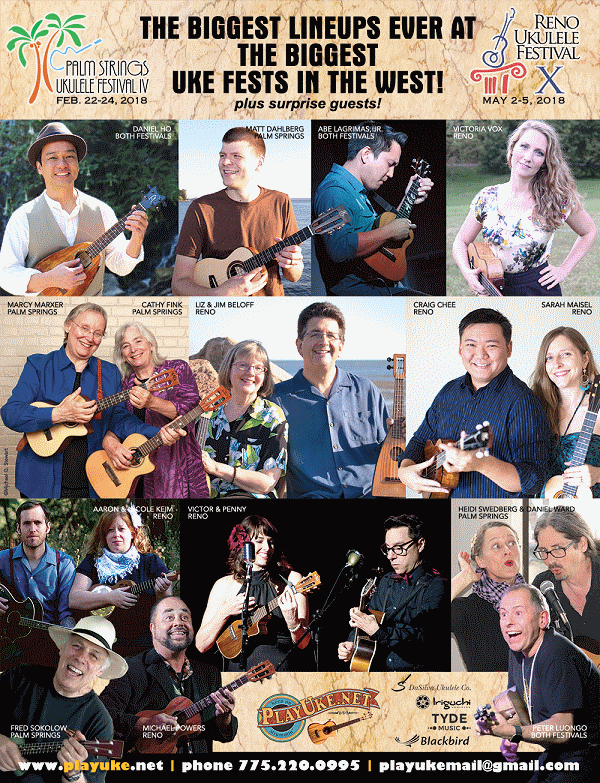 For more info and reservations visit the festivals’ website!